We read in the news that “insiders” are behind many of the largest-scale data breaches. For example, in the Waymo vs. Uber case - which finally got settled last August - Anthony Levandowski, former Google engineer, was indicted for allegedly secretly downloading and passing along confidential files with trade secrets to Uber.

In a much lower-profile case – one that illustrates some of the complexity of dealing with cyber insider threats – Jason Needham, co-owner of a small firm called HNA Engineering, was sentenced to jail for unauthorized access of a former employee’s network. Needham left a former employer, the Allen & Hoshall engineering firm, in 2013. Three years later, a prospective customer received a proposal from his firm that was way too similar to that of Allen & Hoshall. The FBI traced the suspicious behavior back to Needham.

Yet, with all of the reports about breaches that are related to insider threats in cyber security – most of us are not sufficiently aware of what’s involved.

Insider threat actors can include people who are currently employees and those who used to be employees – as well as “outsiders” with access to an organization’s internal environment, such as contractors, vendors, and suppliers.

Generally, an attack by an insider falls into one of the following categories:

We Trust the People We Work With

Most organizational success is built on a foundation of trust. And yet, cyber insider threats are incredibly dangerous – and surprisingly common.

A study from the Ponemon Institute places the average cost of cyber insider threats globally at $8.76 million – a cost that generally increased the longer an insider threat took to resolve.

Have a look at some of these disturbing facts from the Verizon Insider Threat Report:

What Damage Can Insiders Cause?

Cyber insider threats can cause the same types of damage to an organization that other bad actors (criminals or malicious hackers) cause, but they are harder to catch because their activity is disguised – cloaked under the guise of normal employee activity inside the perimeter.

Insiders have the potential to cause tremendous financial loss to an organization through:

The following diagram summarizes the dangers of a cyber insider threat:

Identifying when something’s gone wrong within an organization involves collecting information about employee behavior and organizational function that could be indicative of potential risk.

By tracking people, processes, and technologies using automation & orchestration technologies in a SOC, it becomes possible to identify atypical or malicious behaviors.

In creating your organization’s cyber readiness and protection, it’s important to consider use cases that relate specifically to the insider threat.

The steps to handling a cyber attack by an insider include:

Making Sense of the Data

Being prepared for the future involves forecasting advances in technology and the regulatory burdens that may impact them. This is a difficult task – and those enterprises that are most prepared will utilize the best cyber security strategies and technologies available to leverage the power of Big Data analytics. 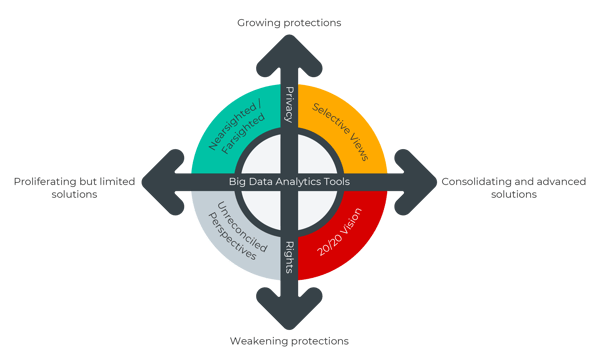 Because an organization’s risk will never be zero, the key is to find the most efficient and effective way to manage residual risk.

The Importance of Detection & Response

While 24/7 monitoring, threat intelligence & threat hunting are key aspects in identifying and responding quickly to cyber insider threats – an equally crucial piece of the puzzle is detection & response, which allows fast handling of an insider’s attack in a way that mitigates the damage to the organization as quickly as possible.

Here at CyberProof, we utilize artificial intelligence (AI) and machine learning (ML) in a fully integrated, holistic approach to managed detection and response that allows organizations to act on alerts in near real time and minimize the risk to a business.

By working strategically to reduce response time, organizations are able to minimize the magnitude of loss caused by an attack and reduce its impact. In other words, speed and agility are crucial aspects of mitigating the cost of a cyber attack to a business.

As explained by industry thought leader Michael G. Gelles, Psy. D., in Insider Threat: Prevention, Detection, Mitigation, and Deterrence, what is necessary is “a complete roadmap for developing an insider threat program to protect an organization’s critical assets from espionage, embezzlement, sabotage, and identity theft with helpful mitigation strategies and tactics for interrupting maliciously motivated insiders intending to do harm to a company or its employees.”

The Insider Threat is a Major Use Case

Building an insider threat program that handles all cases of insider threat attack – including infiltrators, malicious actors, and negligent behavior – is key to maintaining an organization’s cyber readiness. But because of the existence of multiple credentials for each user, and the expanding scope of the IT landscape, it is an increasing security challenge to completely protect organizations against these kinds of threats.

Because it’s so difficult to detect the malicious behavior of insiders, the reality is that three-quarters of insider attacks go unnoticed. However, by putting in place a system that considers the dangers of insider threats through detection & response, it becomes possible to identify and respond to insider threats quickly – in a way that minimizes risk and mitigates damage to the business.

Sinu Peter is a Principal Security Architect at CyberProof and UST Global responsible for advising clients across the public, private and financial sectors, regarding the integration of managed security services to manage risk. He brings to the table over twelve years of experience in a diverse range of areas including enterprise security operations and incident management, risk and regulatory compliance and audit, network and infrastructure protections services – including on-premise, mobile, and hybrid cloud. He is an avid security contributor to his local ISC2 and BCS (British Computer Society) chapters and has obtained certifications as ISO 27001 Lead Auditor/Implementor, C|EH, and CISSP.