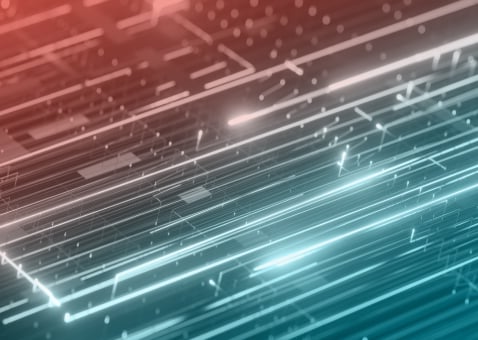 2022’s arrival was plagued by real-world events including the ongoing COVID-19 pandemic and the inception of the Russian-Ukrainian conflict. These events were coupled with a flurry of high-profile cyber-related threats – with widespread Log4Shell and Follina exploitations chief among them.

Threat actors keep up with current events and advancements in technology and leverage the opportunities they represent. Alongside more methodical and calculated approaches that attackers take, they also incorporate current events into campaigns and attack chains.

While many types of attackers fall under the ever-blossoming threat actor umbrella, this post seeks to take a focused snapshot of the malware-related threat landscape from January to July 2022. Its aim is to attempt to analyze malware usage and trends as observed through the lens of a CyberProof analyst whose objective is to provide threat intelligence solutions to enterprise-level clients.

Alongside more methodical and calculated approaches that attackers take, they also incorporate current events into campaigns and attack chains.

In our research, the CyberProof CTI Team identified the following 15 MITRE techniques as most commonly employed in malware attacks:

The MITRE techniques that were used were related to the following tactics:


A comparative analysis of data collected in previous years highlights an interesting trend: data collected by external sources in the first half of 2020 show a large uptick in Scheduled Task usage, alongside a decrease in the volume of malware attacks using Process Injection.

Interestingly, PowerShell exploitation has remained relatively consistent, and is constantly being observed in attacks. 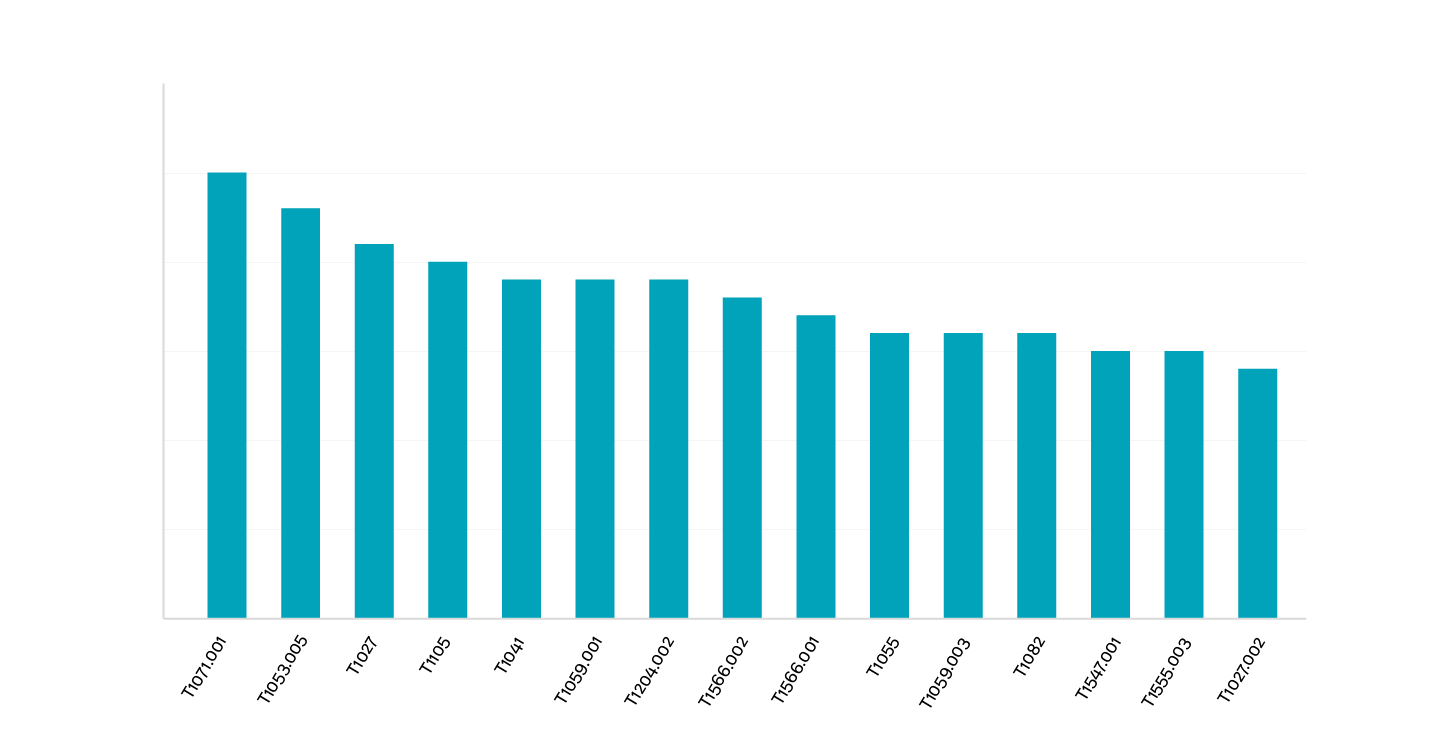 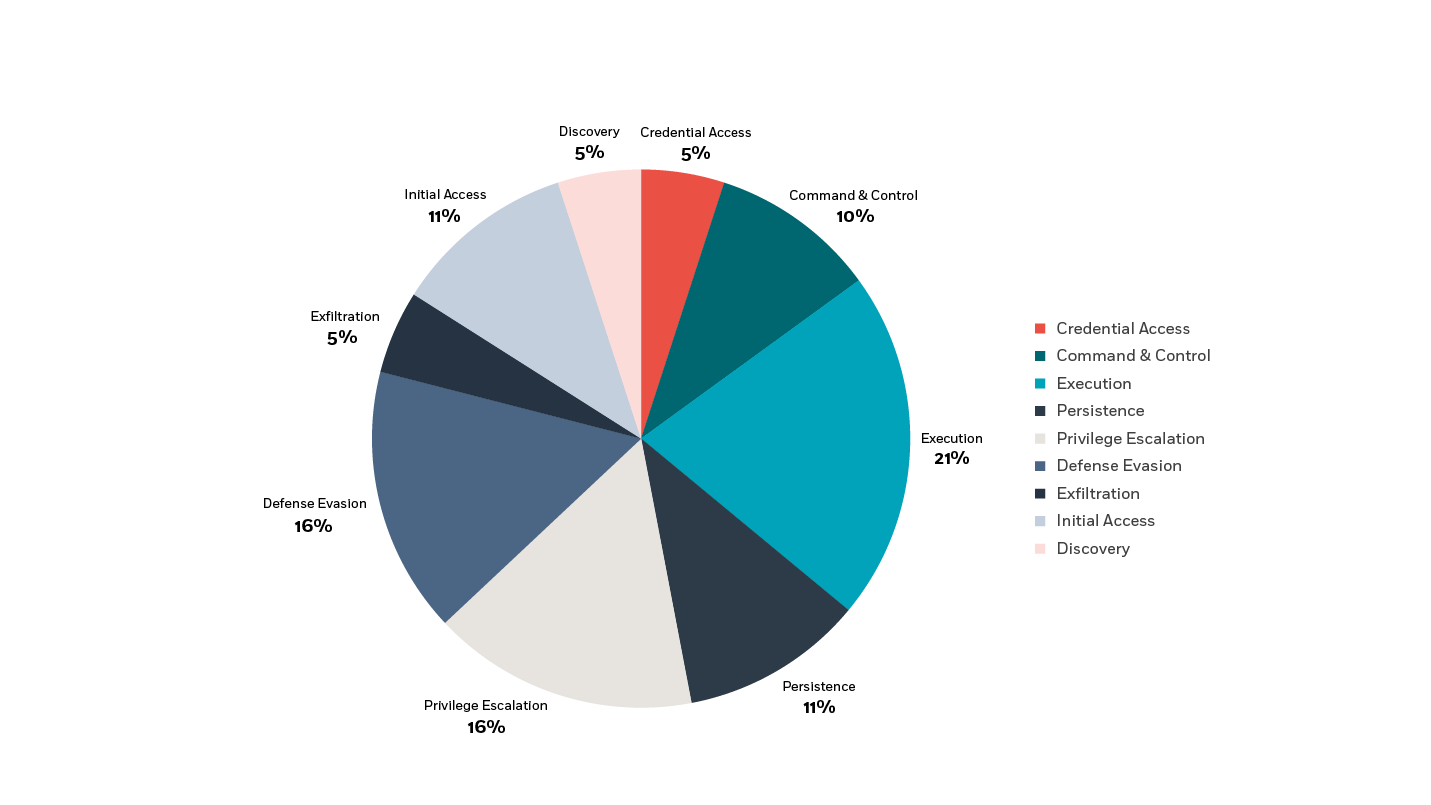 Now that we’ve laid out the top MITRE techniques used this year, we can attempt to understand why they were the most popular.

First, let’s explore why malware was used most often for execution purposes. This notion is supported by several pieces of evidence:

Why Defense Evasion techniques are so prevalent

Bearing in mind the fact that 21% of MITRE techniques used were related to Execution – we can now try to figure out why Defense Evasion techniques were common. Generally, attackers nowadays are more inclined to bide their time and remain undetected for longer periods of time. This is underscored by the following:

Attackers nowadays are more inclined to bide their time and remain undetected for longer periods of time.

In 2022, the CyberProof CTI Team reported:

Qbot-related campaigns were most frequent, Emotet and RedLine incidents came in second place, ASyncRAT, Cyclops Blink, IcedID, Mars, and PrivateLoader campaigns rounded out the rest of the top eight.

It’s worth noting that RATs and Infostealers each comprise 37.5% of the top eight, with Modular malware and Loaders making up 12.5% each.

Modular malware – such as wipers – saw a significant boost during the first half of 2022 due to its major role in attacks on Ukrainian organizations.

Additional insight into the most prevalent types of malware

We can attribute the fact that RATs and infostealers were the most prevalent pieces of malware to the following causes:

QBot and Emotet remain some of the heavy hitters in today’s field. Extensive previous experience in running their respective operations, as well as a solid technological infrastructure, enables them to resume their operations unfettered.

Trickbot is interestingly absent from the top malware strains reported since the malware operation shut down in February 2022.

The rest of the top eight are comprised primarily of other infostealers and RATs, alongside the leftfield modular CyclopsBlink which played a major role in attacks on Ukrainian assets in the Russia-Ukraine conflict, as well as the PII loader PrivateLoader.

As technology evolves – and as the technological infrastructure used by victims changes with the times – threat actors are quick to exploit and incorporate potential newfound “blind spots” as part of their attack chains.

The CyberProof Cyber Threat Intelligence (CTI) Team singled out the following emerging trends and new techniques that we expect to see more of in the second half of 2022 and beyond.

While researching the threat landscape, the CTI Team found it difficult to pinpoint the exact method threat actors might use to deliver the malicious payloads. Below is a non-exhaustive flowchart that showcases how the current delivery chain has no clear distribution pattern.

Between loaders dropping frameworks, RATs dropping backdoors, and other combinations – each threat actor working with complete agency to fulfill their own objectives – we find ourselves up against an ever-shifting “Wild West” of malware distribution.

Looking at malware distribution per threat actor type, we see that APT groups utilize a wider array of malware types in comparison to other group types by quite a large margin.

This makes sense as APT groups usually have a myriad of agendas, all using different means to achieve them. This stands in stark contrast to FIN groups, for example, who are only interested in financial profit.

Some of the types of malware that we observed being used by APT groups exclusively include:

By taking a deeper dive into specific types of malware and how they’re being leveraged by certain threat actors, we can see that loaders and RATs are being evenly employed by all types of groups, while wiper malware is being used almost only by APT groups – save for a single UNC group that is a suspected APT.

In contrast, backdoors saw use by all types of threat actors – though their use was heavily skewed towards APT groups. While APT groups were observed using backdoors in 50% of reported incidents, FIN groups were seen using them over 37% of the time.

At CyberProof, the CTI team tracks which malware types are used by different kinds of threat actors and focuses on revealing emerging trends and new techniques that we expect to be seeing in the future.

Particular kinds of actors can be expected to use specific malware strains – such as backdoors or modular malware. Gaining an understanding of what types of malware attacks are most likely to be utilized is an important step toward mitigating an attack’s business impact.